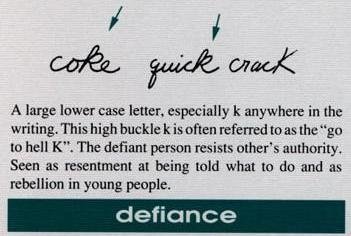 Defiance is one of the most common traits I see.

Because the manual formation of this letter accesses the part of the thought processes that resists authority.

When people are defiant, they are the type who doesn’t like being told what to do. Then again, who does? But this trait indicates the writer will resist in a variety of ways.

The first example that comes to mind is the rebellious teenager. It is very strong in many teenagers as they are learning about boundaries (and pushing them).

Now this trait may sound like bad thing which is not the case. It can be a very powerful in someone who is passionately fighting for a cause they believe in.

This trait is always 100% accurate. But many people with this trait will argue the point particularly if they are mature/older. But when you chat to them about their lives you will see that it is part of their demeanour and they have learned to control it. But it is still there!

Bottom line is, always be diplomatic and ASK, DON"T TELL!